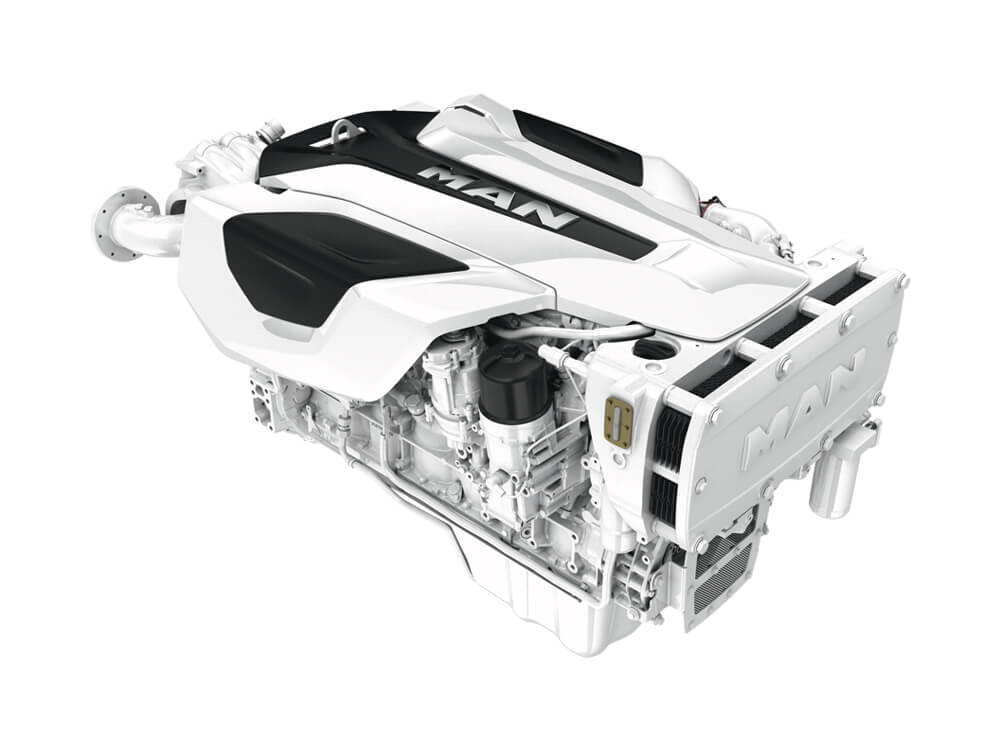 MAN Engines is set to present its latest generation of six-cylinder engines at the Fort Lauderdale Boat Show in Florida, USA. These engines are designed to be used in yachts and trawlers up to 55 feet, as well as in sport fishing boats. The basic six-cylinder engine has been tried and tested many hundreds of thousands of times in a wide range of on- and off-road machinery since it was first introduced in 2007. Modified especially for the use in pleasure craft, the two six-cylinder inline engines, the 537 kW (730 hp) i6-730 and the 588 kW (800 hp) i6-800, each with a cylinder capacity of 12.4 l, are currently available for light duty operations.

The future-proof i6-800 and i6-730 yacht engines, which are based on the D2676 model, also have a modern common rail system offering up to 1,800 bar for high mean pressures and optimized combustion. This enables MAN engineers to achieve lower vibrations and noise emissions along with reduced fuel consumption. To ensure compliance with strict emissions legislation, MAN shares information and data on a regular basis with institutions including the US Environmental Protection Agency (EPA) and the International Maritime Organization (IMO).

The new yacht engines also offer the broad torque plateau that is characteristic for MAN marine engines. The 537 kW (730 hp) i6-730 provides 2,450 Nm of torque, while the high-performance 588 kW (800 hp) i6-800 version manages to generate 2,700 Nm at between 1,200 and 2,100 rpm. This provides maximum torque over a broad engine speed range at the lowest specific fuel consumption, achieving consistent acceleration and a fast and efficient planing.

MAN’s design engineers came up with an optional design cover for the six-cylinder engine, ensuring to fulfil the criteria of elegance and high performance. The sophisticated and timeless design of the perfectly shaped engine stays within the style of modern luxury yachts. “The engine has always been the source of the power and dynamics which naval architects have expressed in their work. The wheel has now come full circle with a MAN yacht engine that is a state of art itself”, explains Claus Benzler, Head of Marine at MAN Engines.

For naval architects the new six-cylinder inline engines come in MAN’s typically compact 1,800 x 922 x 1,103 mm (L x W x H) design and have an even more streamlined oil pan design. With a dry weight of 1,200 kg, the new generation of engines also has an improved power to weight ratio.

To the e-mail form
Benefits at a glance